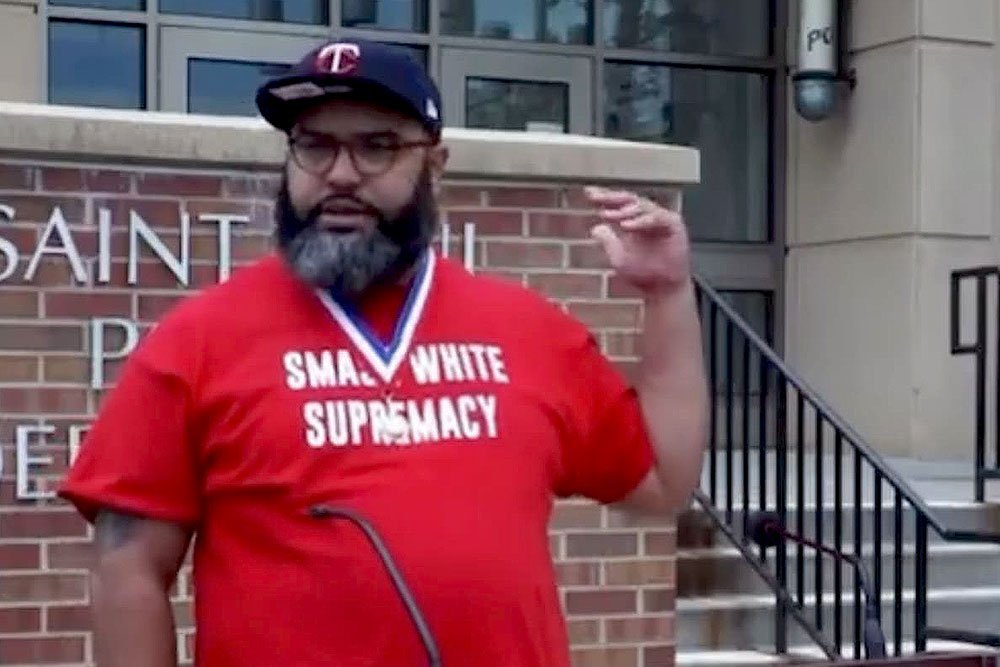 When the St. Paul, Minnesota Police decided to hold a ceremony honoring Alex Mingus last week, they had no idea what they were in for.

Mingus was being celebrated for providing assistance to a shooting victim last October. At the start of last week’s event, Mingus, dressed in a black hoodie and a Minnesota Twins fitted cap, waited patiently as interim Police Chief Jeremy Ellison extolled his actions on the day of the shooting.

According to Police, they received a report of an assault near Rice Street and Larpenteur Avenue on October 8, 2021. One person had been shot and left the scene, while another allegedly threatened to shoot himself and others. The suspect as arrested after a 90-minute standoff.

While all this was taking place, Mingus was driving to work. At some point he encountered the shooting victim and stopped to help.

At the award ceremony Ellison handed Mingus an metal and a microphone, at which point, in front of cameras, Mingus stripped off his hoodie to reveal a red t-shirt with the words “Smash White Supremacy” emblazoned on the front. Mingus wasn’t done there. He thanked chief Ellison then admonished the police for not stopping to provide any assistance as the shooting victim lay “bleeding profusely” — According to Mingus, he tried to wave down help as a number of police cruisers drove past him as they, presumably, rushed to the standoff with the second person.

Speaking to the cameras and those in attendance, Mingus said “9 of your squad cars raced past us… That was a potential of 18 people that could have stopped to help preserve life, but 18 people chose to go to a potential threat,” Mingus said. “And I recognize the man had a pistol and we didn’t know what he was doing.”

Mingus went on to say he appreciated the recognition, but was “very uncomfortable being here with you guys. I do not rock with the police, but I appreciate you giving me the opportunity to say these things,” before concluding that “I just want folks to know that they [police] don’t keep us safe, we keep us safe.”

Enough reading, watch it for yourself below:

"That's not love", Jess Hilarious makes plea to Chrisean Rock on her relationship with Blueface