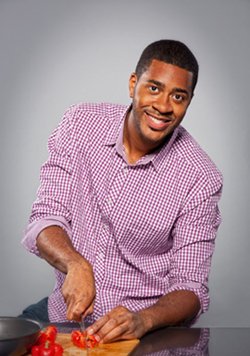 The body of 26-year-old Josh Marks, who was the runner-up on the 3rd season of the Fox cooking challenge show, “MasterChef”, was discovered on a Chicago street Friday night.

The 7-foot-2-inch Marks was diagnosed with bipolar disorder a year ago, and he was diagnosed Marks with schizophrenia just last week. on July 29 Marks got into trouble with the law when he was charged with multiple felonies after attacking a police officer while allegedly claiming to be possessed by “MasterChef” star Gordon Ramsay. The incident landed him in a metal hospital where he under went a mental evaluation.

Friends and family say Marks was a “Gentle Giant” and it showed in his on-screen personality. Nonetheless, after the July altercation his family spoke directly to his fans with a statement on Marks’ website, ishootonions.com, “We are working closely with medical professionals to determine if recent incidents could be related to mental health symptoms and we are so thankful that everyone involved in the incident is safe . . . The Josh that you are hearing about in recent police and media reports is not the spirited Gentle Giant that we know.”

Marks’ lawyer, Lisa Butler echoed the sentiments of the family on Sunday saying: “It is overwhelming to think that with proper, intensive treatment, Joshua may still be with us… He was a jewel with so much talent to offer this world. But, in his state of mind, he turned to the streets for a gun and easily got it.

Marks died from a single gunshot wound to the head. On Sunday the Cook County, Illinois, medical examiner ruled his death a suicide.

Mike Tyson breaks down during press conference: 'I've been lying' about sobriety [Video]