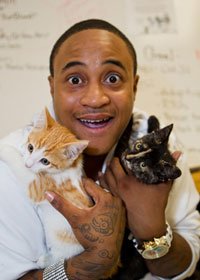 Orlando Brown, who starred in Disney Channel’s “That’s So Raven”, has been hit with three criminal charges after showing up at a woman’s apartment last month and allegedly threatened to kill her and her child.

Brown, 26, was charged with two counts of disturbing the peace and one count of public intoxication Monday (Aug. 11), stemming from his July 24 arrest in North Hollywood after an apparent domestic dispute.

According to TMZ, police arrested the former child star after neighbors called 911 to report his shouting. With at least one claiming the actor had a weapon.

In an audio recording from the exchange obtained by TMZ last month a man can be heard threatening to “kill you, your mama, your daughter, everybody,” but Brown denies making any threats and claims the woman is “a stalker”.

Brown, who was previously arrested in 2011 for DUI, could face up to nine months in jail.

Kodak Black out on bail after arrest at U.S./Canadian boarder