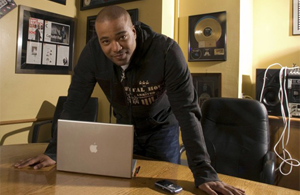 Music exec Chris Lightly committed suicide outside of his Bronx, NY apartment at 11:30 a.m. this morning (Aug. 30). Lightly’s body was discover with what police say was a self inflicted gunshot wound to the head.

According to police Lighty killed himself after a heated argument with his estranged wife Veronica. NYPD sources say Lightly walked away from the argument after declaring “I’m tired of this,” before shooting himself in the head behind his South Riverdale home.

He was found lying face-up on the basement patio in a pool of blood with a 9-mm. pistol at his side.

Last year his wife filed for divorce, the two were married for 7 years, in April he was sued by City National Bank for not paying them after he had overdrawn his account by $53,584, and last October he was forced to sell his Manhattan apartment for $5.6 million to help pay back taxes owed to the IRS. Lighty still owed more than $330,000 in state and federal taxes at the time of his death.