The crash, which killed four other passengers, left Mr. Barker, 32, with serious burns on the lower part of his body, and Mr. Goldstein, 35, with severe burns to his face. Both are listed in critical but stable condition.

Among the dead are Mr. Barker’s friend and sometimes bodyguard, Charles Still, 25 and his personal assistant Chris Baker, 29. Along with the pilot and co-pilot of the jet, Sarah Lemmon, 31 and James Bland, 52. 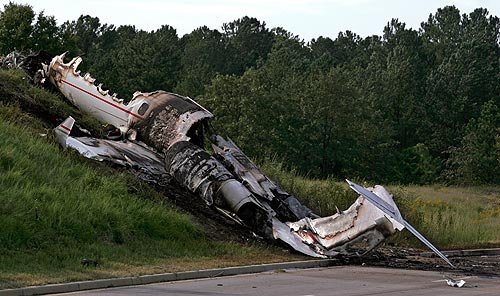 The crash occurred just before midnight on Friday, as the jet was attempting to take off in Columbia, South Carolina en route to Van Nuys in Los Angeles, California. The twin-engine private jet veered off the runway, crashing through a fence before smashing into an embankment and bursting into flames.

MTV reported a bystander witnessed Mr. Barker and Mr. Goldstein running from the crash site and patting each other down to extinguish the flames. The two are being treated at the Joseph M. Still Burn Center in Augusta, Georgia, with Mr. Goldstein purportedly in a doctor-induced coma.

Investigators have recovered the black-box and an investigation is ongoing.

Along with his stint as the drummer for Blink-182, Travis Barker also appeared on a MTV reality show with his ex-wife Shanna Moakler. Their have two children together,
4-year-old Landon, and 2-year-old Alabama.