sports
March 24, 2020
by Stacey Mickles
0 0
This is NFL off-season, yes. But nothing else is happening is sports with coronovius shutting everything down, so let’s take a look at the madness of the last week in the NFL, from free agency to bad trades.

BRADY
The Tampa Bay Bucs may have landed the biggest free agent out there, Tom Brady, which means starting quarterback Jameis Winston is out of job.

NEWTON
The Panthers officially released Cam Newton today after nine years with the team, bringing the Newton era to an end in Carolina. Just five years ago Newton was the NFL’s MVP, guiding his team to the Super Bowl. Newton called out Panthers management on Twitter last week for forcing him into a trade from the team he never wanted to leave.

“Stop with the word play!! I never asked for it!! There is no dodging this one. I love the Panthers to death and will always love you guys!! Please do not try and play me or manipulate the narrative and act like I wanted this.
You forced me into this!!” 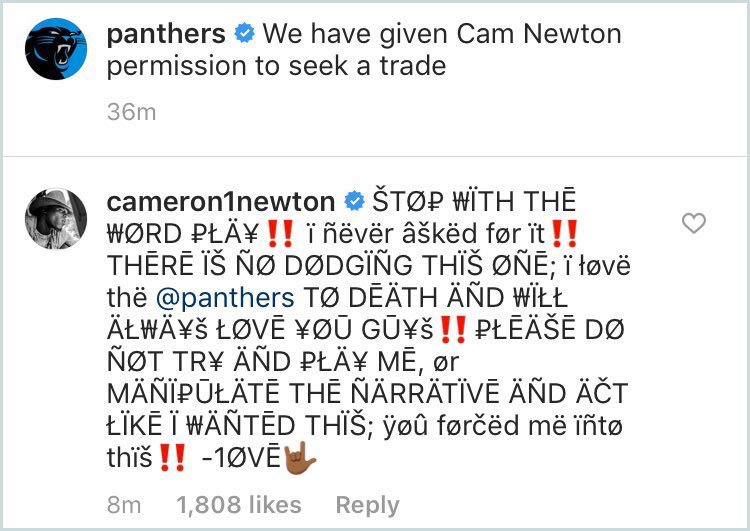 HOPKINS
The Houston Texans pulled off the astonishing feat of trading DeAndre Hopkins, one of their best players (one of the best in the NFL), for peanuts and promises to Arizona Cardinals. The trade’s a head-scratcher. Cowboys legend Michael Irving set cable sports ablaze when he reviled on ESPN’s Get Up! that Hopkins’ trade had less to do with his performance, and possibly more to do with coach Bill O’Brien insecurities.

Report: “The Cardinals are trading David Johnson to the Texans”

Report: “They’re getting DeAndre Hopkins back in return.”

WATSONS
Speaking of the bonehead Texans, rumor has it there’s a chance star QB Deshaun Watson maybe headed to New England to replace Brady (if Cam Newton doesn’t get the spot). If true, Texans fans can facepalm from now through the end of next season. Surprisingly, the source of the rumor is Watson himself.

“I’m just sayin’ you could do better, tell me have you heard that lately?” https://t.co/ioJwXK9J3c pic.twitter.com/zvATbDaUNs

DUNBAR
The Redskins gave up cornerback Quinton Dunbar to Seattle, giving the Seahawks a great shot at reshaping their defensive backfield, Cool news for Pete Carroll. Dunbar had another year on his contract and was angling for a raise. But here’s the kicker, Washington is trading Dunbar for 5th-round pick. Oof!

How on earth does John Schneider do this!? Consistently landing great players via trade and giving little to nothing in return. Ridiculous.

Quinton Dunbar was one of the best CBs last season. Great move by the #Seahawks https://t.co/T705UHeXjC