Things are not well in the house of Ray J. The actor and entrepreneur has been publicly quibbling with wife, Princess Love. But according to Ray J., it’s all just a misunderstanding. It’s also complicated:

The couple and their daughter were staying at a hotel in Vegas. At some point there was an argument that ended with Ray J. staying in an adjoining room.

According to Princess her husband “stranded” her in Vegas and was being entertained by random women while she was next door contemplating the fate of their marriage, following an argument about them moving to a new city. She also says that Ray J. has threatened her with divorce in the past over disputes and did so again this time. Allegedly Ray J. is cool with divorce as long as he can see his kids.

Princess posted on her IG: “A man will have a whole wife, kid and baby, on the way and start an argument with you just to go to his other hotel room to party with escorts and strippers. What’s in darkness, always comes to light. SMH.” 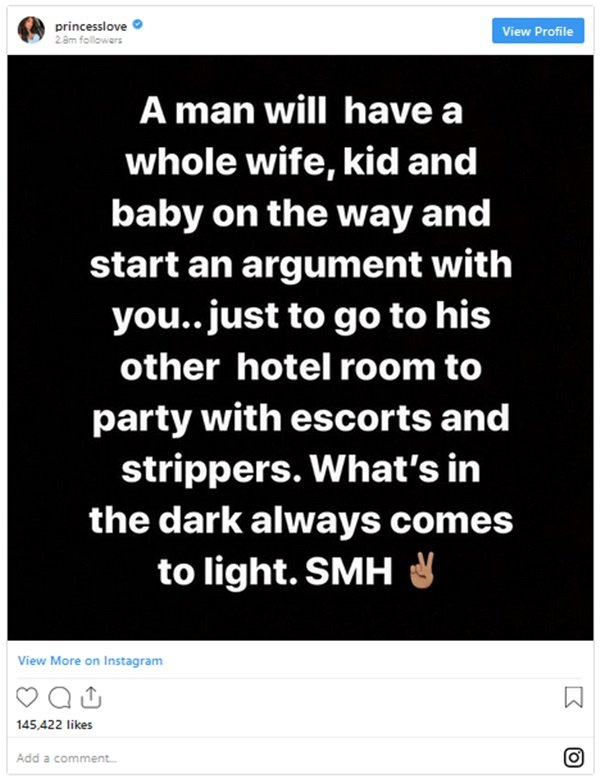 Princess also claims that she has been blocked by Ray J. on his phone as well as social media but in true fashion, he is disputing that allegation. In a video posting Ray J. is makes a plea for Princess to return his calls, saying that he wants to see baby Melody.

The whole thing is sloppy.

Rumor has it, Ice-T files for separation from Coco

Usher breaks down during testimony in custody case